Is this the end of the Shell or Esso garage? An extraordinary array of new concepts is set to transform our streets and cityscapes as Britain prepares to switch from petrol to electric cars. But which technology will prevail? Will we be plugging our electric cars to residential street lamp-posts? Attaching them to connected kerbs? Parking over induction pads? Or driving to super-fast charging bays that will replace redundant petrol stations?

Until now buyers of electric cars have mainly been early adopters wealthy enough to afford the high initial outlay, and with a private driveway at home where they can safely connect their vehicle to an overnight charger. But what if you live in a flat or terraced home? In London, four out of five cars are parked on the street, and owners can’t sling a cable across the path and into their home. And it’s not just a big city thing; in Dundee, 51% of residents live in tenements – prompting the local council to pioneer Britain’s most advanced car charging infrastructure.

Electric cars: you can now find used deals for less than £7,000

So how will the different charging methods work? How will you pay to fill up your car with electricity? 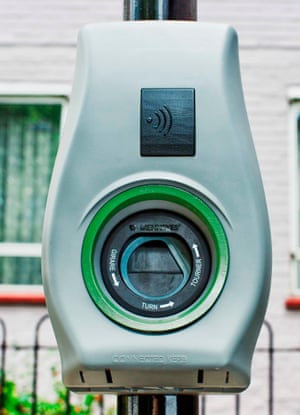 There are 700,000 lamp-posts in London alone, and about 7.5m across the country, all handily connected to electricity and right outside our homes. Is retrofitting them with plug-in points the way forward? According to Richard Stobart of Char.gy, one of the firms handed £37m in grants by the Department of Transport to develop new charging schemes, the standard lamp-post is connected to a 25 amp supply. If they have gone over to LED, then that leaves 24 amps for charging cars. “You will be able to get around 20 miles of driving for every hour of charging at a lamp-post,” says Stobart. Electric cars don’t have to be charged up every night – Stobart charges his Renault Zoe once a week – so in an ideal world, one lamp-post could charge many cars each week, especially in cities where mileage tends to be relatively low.

Last November Char.gy set up the first 50 lamp-post charging points in London in a deal with Southwark council, while in February Siemens/Ubitricity began installing 210 in Richmond upon Thames. It costs about £1,000 to add a charging point to a lamp-post.

Is it just laziness that stops me from switching to an electric car?

Many charging points were free at first, but charges have now crept in. For example, in Dundee they have been free, but from November the cost will be 15p/kWh, plus a connection fee of 38p. The latest Nissan Leaf comes with 40kWh battery, and to work out the cost of “filling up”, you multiply the size of battery (kWh) by the electricity cost in pence per kilowatt hour. So in Dundee it would cost 40 x 15p plus 38p, equal to £6.38 – still fantastic value for a charge that will take you up to 150 miles.

But Stobart acknowledges the issues facing both the manufacturers and councils. “The major concern is always trip hazard. When you run the cable down the gutter then up to your car, there’s still a trip hazard. There’s also issues for the elderly or disabled. The cables can be quite heavy, and you have to get them out of the boot and attached to the car.” 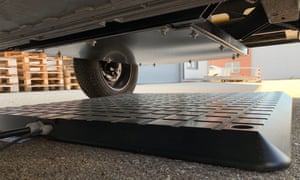 Is this the breakthrough technology that will eliminate the need for charging cables but still let you charge up your car on the street outside your home? So-called induction charging pads work like the wifi charging pads for smartphones – magically charging up the unit without plugging in.

The idea is that the car is simply stopped over a mat, about one-metre square, placed like a manhole in the road outside your house and connected to the lamp-post. The mat transmits power through the air to another mat fitted under the car, using inductive technology, like an electric toothbrush.

Char.gy’s government grant is to develop similar mats in the UK, and in July Redbridge, in London, and Milton Keynes began trialling the scheme.

But for now the mats are hugely expensive and manufacturers are in a chicken-and-egg situation – why would they add the expensive mats to their cars, when the reciprocal mats aren’t available on the streets?

Critics say the technology is still in its infancy. But Chris Pateman-Jones of Connected Kerb says: “It seems unlikely that we will still plug in EVs in the next five to 10 years … indeed the new VW range coming to market next year is induction charging enabled. We see immediate use cases for induction charging in taxi ranks and for disabled people, who presently struggle with the trailing cables involved in charging an EV.”

This week Dundee opened its latest set of 20 fast-charging bays on top of a city centre multi-storey car park – largely powered by solar panels. The city is by far the most advanced in the UK in switching to electric vehicles, with 20% of local taxis already entirely electric.

Fraser Crichton at Dundee city council says it shares the same challenge as London in building an infrastructure for charging. But it says the answer is not to use street lamps.

“We have some lamp-post charging, but they are problematic. You are still running a cable from the car to the charging point and creating a trip hazard. We wanted to steer away from charging infrastructure on the street and avoid more street clutter.”

Crucial to Dundee’s approach is control over the assets. Unlike most English city councils, Dundee never sold off municipal assets such as car parks, and is now in a better position to convert them. “The busiest [charging] hub is in the poorest area of the city and we built it first to show that e-mobility wasn’t all about wealthy Tesla drivers.”

While only 2%-3% of the city’s cars are electric, that’s already much higher than the rest of the UK, and Dundee says it could swiftly add to existing capacity to hit 15%.

Consultancy Urban Foresight, which has worked with the council on its EV policy, says it has already saved approximately 854 tonnes of CO2 emissions, which equates to 5,452,000 miles of driving.

The constant refrain from petrolheads is that queues will build up at the hubs, leaving drivers waiting possibly hours for a fill-up. But Crichton says: “At the moment there is almost never a queue. On a Saturday night, the hubs are busy with taxi drivers.

“But they tend to stay for just eight to 10 minutes for a quick dash-and-go charge.”

Dundee’s next venture is a third hub on the outskirts of the city where it is hoping commuters will leave their cars for charging as they switch to integrated rail and cycle paths into the city centre. 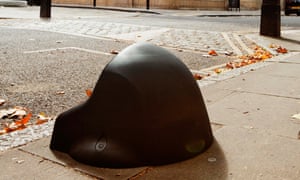 Britain’s residential streets could soon be hosting armadillos, geckos and limpets – the animal-friendly names given to the new so-called kerbside charging points.

For example, there are kerbside charging units dubbed “armadillos” which are made from recycled tyres.

There are “geckos”, which are charge points that can be attached to existing street furniture such as bollards and signs.

And then there are “limpets”, which are wall-mounted units with perhaps 10 sockets apiece that are designed for places such as long-stay car parks and workplaces. All have been developed by the London-based startup Connected Kerb, which has trialled the armadillos and geckos in two locations this year: Southwark in south London, and Windsor & Maidenhead in Berkshire.

These bits of kit are designed to have a low visual impact, and are fitted with sensors and gauges that mean they can also provide local authorities with real-time data on traffic, weather and air conditions. In addition, they act as ultra-fast wifi points.

Talks are under way with Southwark, and Windsor and Maidenhead councils about expanding the trial schemes, says Pateman-Jones of Connected Kerb. “We are now in conversations with over 100 different local authorities around the UK, and are also engaged in planning conversations with a number of private organisations: developers, landowners and car park operators,” he adds.

The company focuses on deploying charging units in long-stay, workplace and residential on-street parking places, where the vehicle “dwell time” is typically longer than three hours.

“This sort of charging isn’t only the most convenient for the user [who can go off, forget about charging and do something else], but it’s also the most suitable from a cost [slow charging is cheaper than fast charging], battery life [slow charging is better for the battery] and grid management [where intelligent slow/fast chargers have less impact than rapids on the grid] perspective,” says Pateman-Jones.

Virgin Media and its parent company Liberty Global announced earlier this year that they would start using their network of underground cable ducts and street cabinets to install kerbside electric vehicle charging points.

“The cabinets are already powered and could be used to roll out thousands of charging points across the country,” say the firms. It also means the telecoms providers are making the most of their existing assets.

Article originally published by The Guardian.